My wife surprised me with this guitar for Christmas 2018. I hadn’t even been shopping new guitars or hinted that I was itching for one. She went into a music store and asked for recommendations from the employees. Upon showing them some of my YouTube videos, they ultimately recommended the Chapman ML1 Pro Modern. I have to admit that I really didn’t know anything about Chapman guitars. I had heard of Rob Chapman and was aware that he had his own line of guitars, but that’s about it.

I really love the look of this guitar and it plays beautifully. There are a few features on this guitar that were firsts for me: stainless steel frets, ebony fretboard, split coil humbuckers, and locking tuners.

The only real issue I had with this guitar is that the nut slots were much narrower than my other guitars and it caused tuning stability (string binding) problems when I changed to heavier gauge strings (even going to 11s from the factory 10s was a problem). I took it back the store where it was purchased and the in-house guitar tech filed the nut slots a bit. This solved the tuning stability problem, but caused an issue where the strings were vibrating between the nut and tuning posts and it was creating an annoying overtone. This issue was easily resolved with a Gruv Gear FretWrap.

I received this guitar as a gift from my parents when I was 16 (yes, I know I’m spoiled). They saw how dedicated I was to playing guitar, and they figured if they got me a nice guitar it would serve me well for years, and it certainly has. It was my dream guitar at the time, and it still is. To this day, I haven’t picked up a guitar that felt better or sounded better to me for heavy music.

My wife and parents surprised me with this gift for my birthday this year! I had been considering getting another “good” guitar to better handle all the alternate tunings used by bands these days. My ESP has the Floyd Rose system, which doesn’t make it easy to quickly change tunings or string gauge, so I decided my next guitar would be a fixed bridge or string-through-body design. This Washburn had all the features I was looking for: EMG active pickups, fast neck, flat fret board, and many others. This is a great guitar, as it plays almost as well as the ESP. I’m still getting accustomed to the absence of fret markers though! 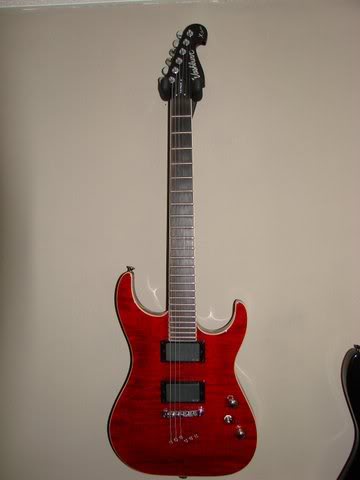 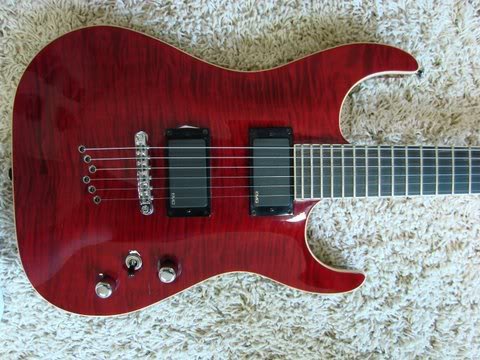 This a cheap guitar that I got at the height of the 7-string guitar craze that hit about 5 years ago. It’s actually a great value for the money, but if I was ever serious about using a 7-string again, I would probably get something better. (Pictures to come later).

My first “real” guitar was a Yamaha Pacifica 112. It was black with a white pick guard. Unfortunately the original was stolen about 8 years ago. However, I liked the guitar so much that I got it replaced (see maroon and white guitar hanging on wall below). For a $200 guitar, this instrument is a great value. I would recommend it to anyone who is looking for a starter guitar or practice guitar; however, it even served me well for many gigs back in the day.

(I only had 3 electrics at the time we remodeled this room… So now I have to leave one in the case). 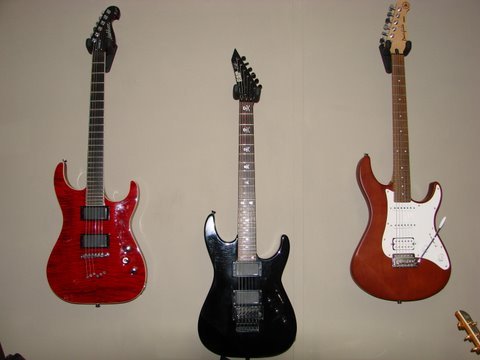 At a certain point, I decided that I wanted an acoustic guitar to do some “unplugged” stuff. This Charvel is a decent guitar for someone who wants to dabble in some acoustic music. It has a pickup so I can plug it in to an amp. It never got too much use at gigs, although once we did some Alice In Chains unplugged stuff (Rooster, Down in a Hole, etc.) at one of our high school activities. Charvel was a division of Jackson at the time, but I don’t even know if they’re around anymore. 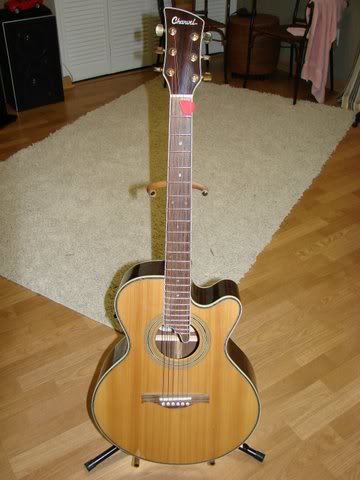 The Line 6 POD is a digital amp modeling device with built-in speaker cabinet / room acoustics emulation and some basic effects. It can be used to play direct through a PA or into a recording device (like I do with my computer), or it can be used as a tone-shaping front-end for a dedicated guitar amp. I’ve used it both ways, but where it really shines in my eyes is as a direct box, because it is so easy to get good tone. I don’t have to bother with setting up a decent microphone to record a cranked amplifier, and my wife and neighbors are certainly happy about that. For my first 20 videos or so, I used the POD 2.0. I purchased the POD X3 in August of 2008 and have used it for videos starting with my “Frostbite” cover (Parkway Drive). The X3 improves upon some of the old amp models and effects and offers a TON more. It also lets you process two completely independent signal paths and blend them together. For Christmas 2008, I received a Line 6 FBV Express foot pedal controller for my POD X3 (thanks Mom and Dad!). It lets me switch among 4 tones in the current preset bank and has an expression pedal for wah effects and volume control. It also indicates the delay tempo via a flashing LED and includes an LED tuning display.

Guitar tone junkies will often dismiss anything that doesn’t have an all-tube power section, but the truth is that most people can’t tell the difference between the tone from the POD and that of a $2000 tube amp, especially when it is mixed in with all of the other instruments. Many people have told me that my tone seems to match the original recordings very well, and they are curious about my settings. There’s nothing special about the settings on my POD 2.0. For the most part I’m always using the “Rectified” amp model (now called “Line 6 Treadplate”—copyright issues maybe?), which was Line 6’s first attempt at simulating a Mesa Boogie Dual Rectifier amp, for distorted tones, and the “Line6 Clean” or “Twang” amp models for clean tones. In most of my videos using the POD 2.0, I am using the “Line6 4x12” speaker cabinet emulation. In some of my earlier videos, I bypassed the speaker cabinet simulation, and the result was a very harsh and fizzy tone. Some people liked this sound, but just as many people thought it sounded terrible. I now much prefer the sound with the speaker cabinet simulation turned on, because the recorded tone blends in much better with the original recordings.

If you’d like detailed information about some of my presets on the POD or would like to download the tone files to transfer to your Line6 device (if compatible), then please visit the POD Settings section. 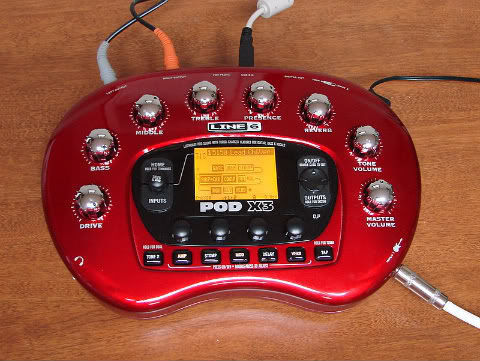 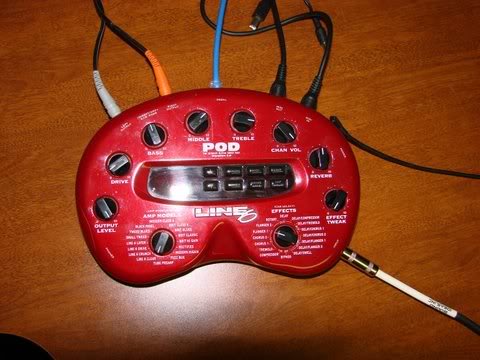 The Marshall 8100 is a 100W head that uses Marshall’s “Valvestate” technology. My understanding is that it has a solid state power section and a tube preamp. Most tone “purists” will tell you that this is a marketing gimmick and that a tube power section is necessary to get that warm tube tone. Since this is the only gigging amp I’ve ever owned, I can’t really say how it compares to a true tube amp, but I can say that I have always received compliments on its tone. I never felt the need to go spend $1500 on an all tube amp head. Maybe that would change if I was every serious about gigging again, but until then I’ll probably just continue playing through my POD and “simulating” that tube tone. An interesting fact about this amp is that it was preferred by the late Chuck Schuldiner (he lost a battle with brain cancer), the main songwriter and frontman for the band Death. Maybe one of these days I’ll record some tone samples from this amp and post them in case anybody is curious.

The Marshall 1960A is a standard Marshall 4x12 (four 12” speakers) angled cabinet with Celestion speakers. 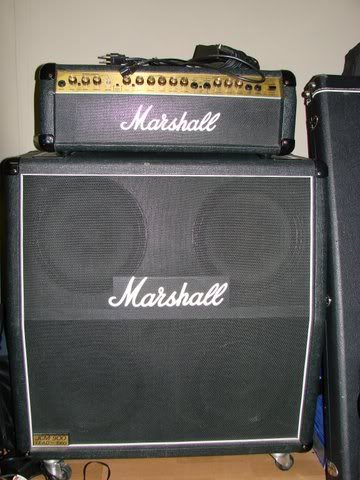 We moved to a new house in 2010, and my new office wasn’t very well suited for music or recording. It had hardwood floors, rectangular dimensions, and no furniture to help with sound absorption. There were horrible standing waves that really bothered me when practicing or listening to music through speakers. Further the entryway to the office didn’t have doors, so I had to wear headphones most of the time to avoid disturbing the rest of the house. I think this was something that contributed to my lack of motivation and inspiration during my 10-year absence from YouTube.

In the fall of 2017 we had our basement finished, and the new space turned out great. The primary intent was to create a play area and TV/gaming space for the kids, but I claimed a corner for my new practice space and studio. For now I’m using an old kitchen table as a makeshift recording desk, but this space/setup is a huge improvement over the first floor office! The acoustics are pretty good due to the drop ceiling tiles, relatively large open space, and irregular room dimensions. I can play through speakers now at a low volume without disturbing the rest of the house, though I do often have to compete with the kids when they’re in the basement playing or watching TV. 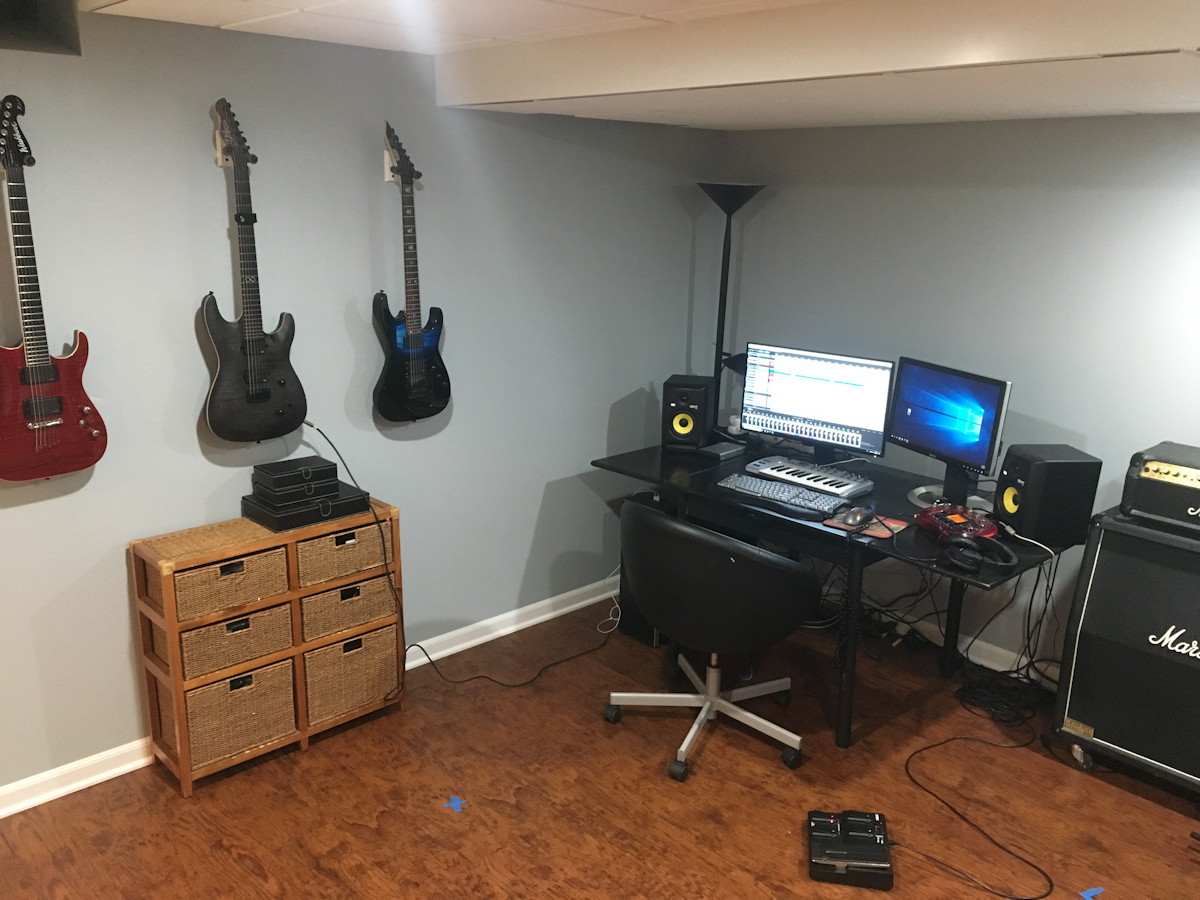 Below is a picture of my recording desk used during 2007-2010 at my old house. My initial setup was simply a Line 6 POD (2.0, and later an X3) and a Windows XP PC with consumer grade Creative Labs speakers. Later on I acquired some decent headphones (Sennheiser HD280) and KRK Rokit 5 G2 studio monitor speakers. These studio monitors each have a built-in power amplifier, and they possess very flat (accurate) frequency response characteristics. In other words, they don't accentuate bass or treble like many hi-fi speakers for home stereos. Instead, they provide a very accurate representation of the audio signal so you can create a mix that sounds as good as possible in any listening environment. I can hear so many more details and subtleties in music with these speakers than I could with the crappy Creative Labs speakers. 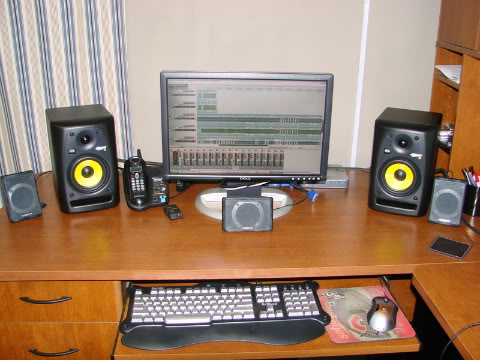 I’ve been using very thick picks since my early playing days. Dunlop Tortex 1.14 mm and Dunlop Gator grip 1.0 mm are the ones I’ve used the most. Recently I’ve been using Snarling Dogs Brain Picks though (1.0mm). I love how they have a grid of small bumps to help with grip.